Jessica Carter of Jackson plays with daughter Lyndsey Lee Carter in one of the new private NICU rooms in the Kathy and Joe Sanderson Tower at Children’s of Mississippi.

On Tuesday, Jessica Carter slept near her baby for the first time, inside one of the 88 private rooms of the neonatal intensive care unit in the Kathy and Joe Sanderson Tower at Childrenĺs of Mississippi.

Lyndsey Lee Carter came to the University of Mississippi Medical Center April 18 as a 1-pound, 3-ounce micro-preemie. Two surgeries and time to heal and grow followed.

Lyndsey Lee was one of 67 babies moved one by one Wednesday from the neonatal intensive care unit at Wiser Hospital for Women and Infants to the Sanderson Tower, where 88 private NICU rooms are available for parents and their babies.

The rooms feature beds for parents and private bathrooms along with the space needed for medical teams and experts.

ôThey put so much thought into these rooms, and they are bigger than I was expecting,ö Carter said. ôYou can tell they were thinking about what a family would need.ö

The neonatal intensive care unit at UMMC is the stateĺs only Level IV NICU, the highest and most comprehensive level of care. UMMCĺs pediatric arm, Childrenĺs of Mississippi, includes the stateĺs only childrenĺs hospital and outpatient specialty clinics around the state.

The NICU move was the last of the patient transfers from older intensive care spaces to the Sanderson Tower. On Wednesday, four new patients were admitted to the NICU floors at the Sanderson Tower, bringing the first dayĺs NICU patient count to 71.

ôEverything went so well,ö said Dr. Mobolaji Famuyide, chief of Newborn Medicine, of the transfer of patients. ôNone of our patients had any problems during the move, and all of our employees worked together as a team for the children.ö

Planning of the five-hour transfer of NICU patients has been in the works since 2016, well before the first brick of the Sanderson Tower had even been laid. Famuyide and her team have been researching best practices in moving neonatal intensive care patients developed by the nationĺs most respected childrenĺs hospitals.

As the opening of the Sanderson Tower neared, teams including neonatologists, neonatal nurses, nurse practitioners, speech-language pathologists and respiratory therapists began training, rehearsing each step in the transfer process.

ôTodayĺs move completes our journey to becoming a state-of-the-art childrenĺs hospital,ö Famuyide said. ôThis is state-of-the-art when it comes to design, and it matches the medical professionals and equipment here. This is the future, and itĺs here now for Mississippi.ö

TheáSanderson Towerĺs opening began Mondayáwith surgery, specialty clinics and an imaging center with MRI machines that look more like a lighthouse and a pirate ship than medical equipment.áOn Tuesday, 12 critically ill children were transferred from the pediatric intensive care unit at the Batson Tower to larger private PICU rooms in the Sanderson Tower.

ôThe activation of the Sanderson Tower has gone better than I ever could have imagined,ö said Dr. Mary Taylor, Suzan B. Thames Chair, professor and chair of Pediatrics. ôYesterdayĺs transfer of PICU patients was done very safely, and since then, we have admitted a few more children to the PICU. Our NICU move was a huge feat, and so many doctors, nurses, nurse practitioners and respiratory therapists were pitching in to transfer these patients, one by one, very safely.ö

Taylor said the clinical space, opened Monday, has cared for more than 194 children this week. More than 60 surgical procedures have been performed inside the Sanderson Towerĺs dozen operating rooms.

Abbey Phillips of Madison was taking son Ward to an outpatient visit with a Childrenĺs of Mississippi specialist Wednesday.

ôThe Sanderson Tower is beautiful,ö she said, ôand we got done in an hour what would have taken us three hours before!ö

The Sandersons, in 2016, launched the philanthropic drive to help fund a childrenĺs hospital expansion at the University of Mississippi Medical Center with a $10 million personal gift.áThe Campaign for Childrenĺs of Mississippiáhas since raised more than 84 percent of its $100 million goal.

ôWe have excellent providers, and this brings our facilities up to a completely different level,ö Taylor said. ôHaving the Kathy and Joe Sanderson Tower is just a leap into the future.ö 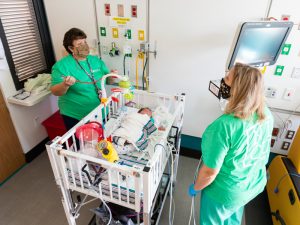