A portion of the Famous Maroon Band practices a choreographed marching routine that will be showcased this year in video format and on social media during football games. The band will continue its support for the Bulldogs this year while adhering to operations guidelines set forth by the SEC. (Photo by Megan Bean)

Football is back at Davis Wade Stadium Saturday! The Bulldogs will begin the home portion of the 2020 season at 6:30 p.m. against Arkansas.

With special health and safety measures in place, Mississippi StateÆs Famous Maroon Band will be bringing the beat once again in support of the Bulldogs.

ōThe Famous Maroon Band is one of our most treasured traditions at Mississippi State, and while we will miss our student musiciansÆ on-field performances, weÆre excited to hear their beautiful music in other ways at Davis Wade Stadium this season,ö said MSU President Mark E. Keenum.

In accordance withĀgame operations guidelines set forth by the Southeastern Conference in late August, only essential personnel will have gameday access to the field and sidelines.ĀBands currently are restricted from performing on the field before games and at halftime.

Elva Kaye Lance, MSU director of bands, said the groupÆs choreographed halftime routine will be showcased in video format during the game and on social media.

ōWeÆre working with MSUÆs University Television Center and Broadcast Media Group in Starkville on these projects that highlight the band playing and marching, as well as some interesting insights into the program that folks may not know,ö Lance said.

The gameday band will be limited to 100 members, along with extra support staff and directors, all sitting in Section 15 with appropriate physical distancing.

What changes can fans expect on gameday?

The campus gameday environment will look different than previous years. In accordance with guidelines established in Executive Order 1519 from Mississippi Gov. Tate Reeves, tailgating will not be permitted on MSUÆs campus this season. This prohibition applies to all tailgating, picnics, fanfare areas and the like.

Additionally, fan access to campus buildings will be limited. On-campus dining options will include the Marketplace at Perry, which will be serving a gameday menu from 11 a.m. until 7 p.m., as well as Chick-fil-A, which will serve meals from a tent on the plaza outside of Colvard Student Union noon. until 5 p.m. The Union will be closed during gameday. Subway will be open from noon until 8 p.m., and Steak æn Shake will be open from noon until 11 p.m.

Barnes and Noble will be open from 10 a.m. until 7 p.m. Public restrooms will be available at Subway, Humphrey ColiseumÆs east exterior, Newell Grissom gymnasium, the Roberts Building (post office building) and the MSU soccer stadium. Portable restrooms will be in place at the MSU Amphitheater, Dorman Hall, as well as the parking lots near the Industrial Education Building, Hilbun Hall and Zacharias Village.

This season, paid public parking will be available only for ticket holders at two locations on campus. The North Public Paid Parking Lot is located in the large parking area between Humphrey Coliseum and the Joe Frank Sanderson Center. South Public Paid Parking is located on the southeast corner of Stone Blvd and Bully Blvd west of Fresh Foods. Public ADA parking is available for ticketholders in Lot D, located east of McCarthy Gymnasium. All parking lots will open 3.5 hours before kickoff. To purchase parking in advance, visitĀwww.hailstate.com/tickets. Click here to view a parking map.ĀĀ

Fans also should keep in mind that face coverings are required during ingress, egress, and movement throughout the stadium. Face coverings are recommended while fans are seated and not eating or drinking. Ticket holders must enter the stadium through the gate assigned on the ticket. Concessions will be available throughout the stadium via cashless transactions only. MSU announced in July that it will transition to mobile ticketing for all ticketed athletic events, beginning with this season. Click here for more information and answers to frequently asked questions about mobile ticketing.

The post Football is back at Davis Wade Stadium this weekend appeared first on News Mississippi. 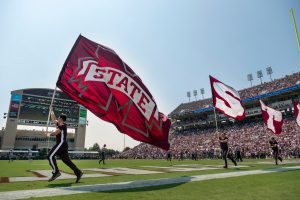