Last week a father in Virginia called the Lee County SheriffÆs Department after he received a FaceTime call showing his son tied up to a tree with a gun to his head in Lee County, Mississippi.Ā

The father says he received the call about his son, 24-year-old Andrew Blake Hawks, who was allegedly kidnapped. The individual who made the call, demanded money by a specific deadline, in exchange for his sonÆs life.Ā

ōThis is a case where an individual owed another individual a drug debt and this is what it evolved into,ö Lee County Sheriff Jim Johnson stated. ōThe parents received a call from a person they believed to be their son begging for his life and then they heard a gunshot and at that point, they assumed the kidnapper had then killed their son.ö

Shortly after the gunshot, the father received another call from the individual threatening to cut HawksÆ fingers off until the money demands were met. Hawks parents received pictures of a hand and body parts every ten minutes. The images gradually got worse as no money was sent.Ā

During the investigation, the authorities and HawksÆ parents grew suspicious that the incident might not be an actual kidnapping.

ōThe parents became suspicious once they looked at the hand that was in the photograph and was able to determine they did not believe that was their son,ö Sheriff Johnson stated. ōThis entire time they were talking with us at the sheriffÆs department.”

Later in the evening, the ōkidnapperö was told the money was sent via Western Union, and when undercover investigators arrived, the ōvictim,ö Andrew Blake Hawks, was at the counter trying to pick up the money. Ā

Hawks was immediately taken into custody and charged with extortion and possession of a weapon by a convicted felon.Ā

Hawks had an accomplice, 36-year-old David Fisher, who was shopping inside the store. Fisher was arrested and charged with extortion.Ā

This is a developing story.Ā

The post Son faked his own kidnapping for drug money appeared first on News Mississippi. 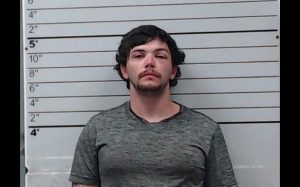