The National Hurricane Center says unsurvivable storm surge with large and destructive waves will cause catastrophic damage from Sea Rim State Park, Texas, to Intracoastal City, Louisiana, including Calcasieu and Sabine Lakes. This surge could penetrate up to 30 miles inland from the immediate coastline.

As of 1 p.m., maximum winds of 140 MPH were recorded.  Officials say little time remains to protect life and property before water levels begin to rise and winds increase in the warning areas.

Here is the latest from the National Weather Service:

A Storm Surge Warning continues for Freeport, Texas to the Mouth of the Mississippi River.

A Tropical Storm Warning is in effect for Sargent, Texas to San Luis Pass, East of Intracoastal City, Louisiana to the Mouth of the Mississippi River.

A Storm Surge Watch continues for the Mouth of the Mississippi River to Ocean Springs, Mississippi, Lake Pontchartrain, Lake Maurepas, and Lake Borgne.

A Hurricane Watch continues for East of Intracoastal City to west of Morgan City, Louisiana.

Hurricane conditions are expected in the hurricane warning area tonight and Thursday, with catastrophic wind damage expected where Laura’s eyewall makes landfall tonight. Tropical storm conditions are moving onshore of the coast of Louisiana within the tropical storm warning area and are expected to reach the coast in the hurricane warning area later this afternoon or evening. Hurricane-force winds and damaging wind gusts are also expected to spread well inland into portions of eastern Texas and western Louisiana early Thursday.

Unsurvivable storm surge with large and destructive waves will cause catastrophic damage from Sea Rim State Park, Texas, to Intracoastal City, Louisiana, including Calcasieu and Sabine Lakes. This storm surge could penetrate up to 30 miles inland from the immediate coastline in southwestern Louisiana and far southeastern Texas.

At 1 p.m. CDT, the center of Hurricane Laura was located about 200 miles (320 km) south-southeast of Lake Charles, La. It’s moving toward the northwest near 16 mph (26 km/h). A gradual turn toward the north-northwest and north is expected later today and tonight. On the forecast track, Laura will approach Upper Texas and southwest Louisiana coasts this evening and move inland within that area tonight. The center of Laura is forecast to move over northwestern Louisiana tomorrow, across Arkansas Thursday night, and over the mid-Mississippi Valley on Friday.

Reports from an Air Force Reserve Hurricane Hunter aircraft indicate that maximum sustained winds have increased to near 140 mph (220 km/h) with higher gusts – an extremely dangerous category 4 hurricane on the Saffir-Simpson Hurricane Wind Scale. Hurricane-force winds extend outward up to 70 miles (110 km) from the center and tropical-storm-force winds extend outward up to 175 miles (280 km). Tropical-storm-force winds have reached the coast of Louisiana and an observing site at Eugene Island recently measured sustained winds of 39 mph (63 km/h) and a gust to 64 mph (104 km/h). Some additional strengthening is possible this afternoon, and Laura is forecast to remain a category 4 hurricane through landfall tonight. Rapid weakening is expected after Laura makes over land.

The combination of a dangerous storm surge and the tide will cause normally dry areas near the coast to be flooded by rising waters moving inland from the shoreline.

The water could reach the following heights above ground somewhere in the indicated areas if the peak surge occurs at the time of high tide:

From this afternoon through Friday, Laura is expected to produce rainfall totals of 5 to 10 inches, with isolated maximum amounts of 15 inches across portions of the northwestern Gulf Coast from western Louisiana to far eastern Texas, and northward into much of Arkansas. This rainfall will cause widespread flash and urban flooding, small streams and creeks to overflow their banks, and minor to isolated moderate freshwater river flooding. 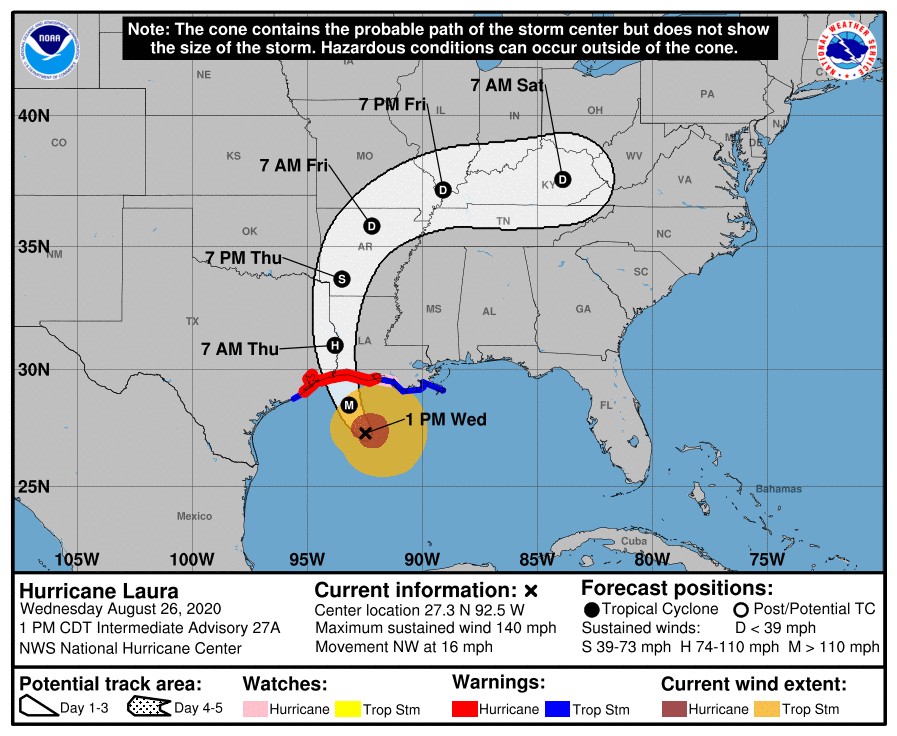